Following their hugely successful opening in June, The Crux & Co is set to open their new city Patisserie Shop on October 19 which will be the fourth dining haunt to paint its name at Sheraton Melbourne Hotel.

The Crux & Co Patisserie will offer guests a dynamic range of coffees, including brews from Five Senses Coffee and other local roasters. The culinary focus of the new patisserie will be on coffee and sweets treats including macarons, varrine, petit gateau and pastries such as the renowned croissant bagel ‘crogle’. Head pastry Chef Louise MK Lee is especially proud to treat customers to a range of specialty éclairs and macarons. The Crux & Co is open Monday – Friday, 7am – 4pm.

Since its induction into the Melbourne foodie scene in March of 2014, Sheraton Melbourne Hotel has continued to set new standards and raise the bar for Melbourne 5-star hotels with each of its three premier dining hangouts excelling in their own niche markets.

Terrace Bar on level three of the hotel was recently awarded Hotel Bar of the Year at the 2016 TAA (Vic) Awards for Excellence and offers an exquisite and contemporary designed outdoor setting with views overlooking Little Collins Street. To celebrate its most recent accolade, Terrace Bar has partnered with Champagne Bollinger to bring forward a new high-end menu featuring its signature dish of Sautéed Scallops on a Seaweed and Citrus Salad paired with Bollinger special cuvée NV. Terrace Bar is open Tuesday to Saturday from 4pm.

EAST Bar & Restaurant is a contemporary wine bar and tapas sharing-style restaurant located on the ground floor at Sheraton Melbourne Hotel. Brought to you by the team behind the cult Hutong Dumpling Bar, East offers Melbourne’s most innovative interpretation of traditional Chinese flavours with a wine and cocktail list to match. EAST is open Monday – Sunday for lunch and dinner.

Executive Chef Achim Herterich is inspired by the kitchen and the food that can be masterfully produced within it. At the age of five he would sit under his mother’s kitchen table creating imaginary masterpieces, by nine he was baking fresh bread and by twelve he was cooking meals for his family. Now in his third decade of his career, he is creating culinary works of art from Preserved lemon and herb infused ricotta gnocchi on a fricassées of Moreton Bay bugs, prawns and parmesan shavings to Chocolate parfait with caramelized popcorn candied hazelnut and chocolate ice cream (pictured) which feature on the spring menu. Little Collins St Kitchen Is open Monday – Sunday from 6:30am – 10:30pm. The Signature Sheraton Seafood Buffet can be enjoyed from Wedesday – Saturday for dinner and Sunday Brunch.

Sheraton Melbourne Hotel is the most recent international 5-star hotel to open in the Melbourne CBD.

Located at the fashionable ‘Paris end’ of Collins Street and housed in the 31-story ‘wavilinear’ building, Sheraton Melbourne Hotel features 174 guest rooms, including 11 Terrace Suites. The hotel is ideally located within walking distance of major corporations and is just moments away from the city’s finest dining, shopping, theatres, nightlife and sporting venues. 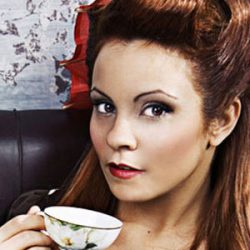