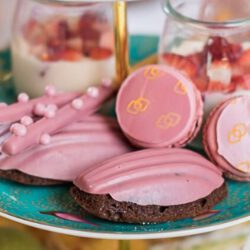 Eaten during “Le Goûter”, with friends, dipped in a bowl of hot chocolate or spread with jam, La Madeleine is the typical French mini cake that is always a delight for young and old alike.

According to the legend La Madeleine was created in 1755 during a reception organized by Stanislas, the king of Lorraine, in northeast France. During the meal, he was told that his pastry chef, angry after a quarrel, had given up his apron. That a reception without dessert was not possible, a young cook named Madeleine Paulmier intervened and offered to make small cakes from her grandmother’s recipe. It was a success! The duke baptized the French cakes in homage to his saviour and Commercy became the world capital of the Madeleine.

The Sofitel Sydney Darling Harbour has decided to pay tribute to this pillar of French gastronomy by serving them during their Claris High Tea. Every Saturday afternoon, let yourself be indulged in an exquisite afternoon tea inspired by Australian fashion illustrator Megan Hess and her acclaimed children’s book, Claris, the Chicest Mouse in Paris.

Puti Firmansyah is the Executive Pastry Chef at Sofitel Sydney Darling Harbour. Puti brings a fusion of Indonesian, Dutch, French and Australian influences to her approach, with many dishes inspired by her mother and grandmother and recipes passed down through generations.