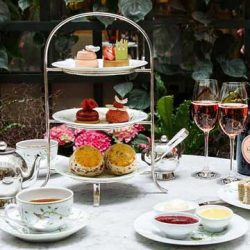 These Rose and Raspberry Scones are inspired by a love for summer and rose gardens. Pretty as a picture and twice as nice to eat, they are perfectly paired with a glass of rosé.

Thibault Marchand has worked as a pastry chef around the world for the past six years, beginning his career as Pastry Chef de Partie at patisserie and chocolaterie experts Hugo & Victor in Paris and advancing to Pastry Executive Chef in their Miami site. Thibault returned to Paris to take on the role of Pastry Sous Chef at luxury catering firm Kaspia Réceptions and then in 2016 became Head Pastry Chef at Parisian patisserie La Ruche.

In 2017, Thibault made the decision to move to London, beginning his time at world renowned bakery Dominique Ansel before advancing to Head and then Executive Pastry Chef at Kimpton Fitzroy Hotel, the hotel overlooking Russell Square in Bloomsbury. Thibault has taken part in a number of pastry competitions including the UK Junior World Chocolate Masters 2017 and won the Channel 4 TV show ‘Bake Off: The Professionals 2019’, representing Kimpton Fitzroy London.